I just caught up with the fact that since 1995, Presidents Clinton, Bush, and Obama have issued a series of annual proclamations designating the month of March as “Women’s History Month.” Looking back over my previous postings, I see that I have featured mostly male ancestors. So, with this posting in my 52 Ancestors series (see below for info), I am focusing on a female ancestor, Mary E Sumner Green, one of my maternal great grandmothers.

First, here is how I am related:

In this report, we will examine census records (obtained on Ancestry.com and FamilySearch.org) and a letter written by Mary’s aunt at the time of her death, but first we want to present a transcription of her Death Journal entry in Michigan found here on FamilySearch.org :

In the same Oceana County Death Journal, the entry right above  Mary’s death record reveals another fact: Mary E Furman bore a daughter just a month before her death. According to this earlier journal entry, her baby lived only three days and was never given a name. The infant’s died on 3 Nov 1884 and was caused by “inflammation [of] lungs.” Stephen E Furman was listed as the father. The entry reported that both parents were residing in Michigan, but gave no specific details about place of residence.

Shown here are exerpts from page 1 (top) and page 2 of the Death Journal showing the two entries of interest on lines 28 and 29 (click on images to enlarge) : 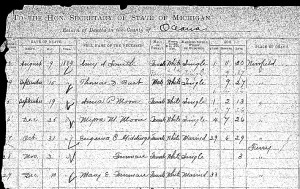 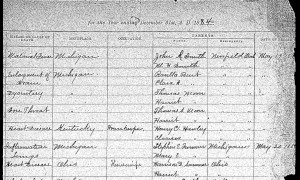 If you want to see the full digital images on FamilySearch, go here and here.

Note that her family name in these records was Furman. I have every confidence that these record are correct because she was living with family members who were knowledgeable about her situation, and obviously cared about her. We’ll get around to that letter I mentioned and to her husband, Stephen Edwin Furman, later in this report. At this point, however, I want to use census records to track Mary’s life from Conneaut Twp to Ferry Twp in Michigan.

In the 1860 U.S. Federal Census, Mary Sumner was enumerated on the 27th of June as being 10 years old and living in Conneaut Twp. She was living in the household of Harrison Sumner, age 36 [her father]; Harriet Sumner, age 37 [her mother]; and four siblings: William, age 16; Charles, age 14; Emily, age 12; and George, age 6. Harrison was born in New York State and was a farmer, and Harriet was born in Pennsylvania. All the children were born in Ohio. There is no value listed for Harrison’s real estate, but his personal estate was valued at $500.

In the 1870 U.S. Federal Census for Conneaut Twp, Mary is enumerated as Mary Green, 20 years old, keeping house in the household of Jared D Green, age 34, who we know was her husband. I haven’t found a record of their marriage, but it probably was about 1866 or 1867, when Jared returned from the Civil War. Also living in the household were Frank Green, age 10, and Evelyn Green, age 7, children born to Jared’s first wife, Mary Drake, who died in 1865. Jared was listed as a “grocer – retired.” His personal estate was valued at $150. (I posted a report about Jared on Feb 25, 2014. You can read it here.

Jared passed away in Nov 1879 (cause of death was emphysema) according to the 1880 Mortality schedule, so in the 1880 U.S. Federal Census, Mary E. Green was enumerated as head of household, 28 years old, widowed, and living in Conneaut Twp, with her daughter, Gracie D, age 1. Her occupation: keeping house.

Sometime after the 1880 census, Mary married Stephen Edward Furman, who also lived in Conneaut Twp. I don’t have any record of their marriage, or of where they lived in Ohio. Sometime after they got married, however, they traveled across Ohio and up into Michigan, probably by railroad, to join relatives. Mary’s uncle had earned a homestead with 40 acres in Ferry Twp, in Oceana County. The county is on the eastern shore of Lake Michigan and has gained a reputation as the “Asparagus Capital of the World” for its high production of asparagus. In the 1880s, however, the area was attracting homesteaders who wanted to operate fruit tree farms, and that is what Mary’s uncle, George Sumner, did.

By 1884, Mary was pregnant, and probably having a hard time. After the birth–and death–of her baby, she was living with her Uncle George and Aunt Harriet, according to a letter written by Harriet to a friend, Jennie Morley, in Andover, Ohio. Somehow the letter survived over the years among the papers of Frank Green (I’ll give a report on Frank at some point in the future). The paper on which the letter was written remains in good shape, but the ink obviously was cheap, and the writing has faded over the ensuing 130 years, even though it was hidden away from sunlight.

According to Harriet (Mary’s aunt, not her mother), Mary had come to live with them in Ferry Twp, not “those Furmans” living nearby. Marywas bed-ridden after she gave birth, and a doctor told her she had an enlarged heart (her literal “big heart” of the title of this report), and that she might not have long to live.

According to a definition offered online by the Mayo Clinic,

As we know now, Mary did succumb to her “heart disease.” That meant that Gracie was essentially an orphan, because Stephan Edward Furman was living elsewhere in Michigan and did not offer to care for her. Also, George Sumner had become “sickly” and he and Harriet didn’t think they could care for Grace. Under these circumstances, Harriet wrote the letter to Jennie Morley suggesting that she take in Grace and raise her. And that is what happened, and yes, I will discuss this in another episode in my 52 Ancestors series.

In about 1998, I undertook a research trip to Oceana County to see what I could learn about Mary’s stay there. This was before genealogical and family history data had became available on the Internet. The drive there took about five and a half hours, and I stayed in a bed and breakfast in Hart, the Oceana County seat. I did find the cemetery in Ferry Twp where Mary was buried in a family plot purchased by George Sumner. For Mary’s burial, George acquired a simple head stone with the initials MS engraved on it. I was able to confirm that this was Mary’s final resting place as a result of a chance encounter with the cemetery caretaker, and that she was the first family member to be buried in the plot. The caretaker was mowing grass when I flagged him down to ask where the cemetery records were kept. He said that he had them in his pickup truck and that he would show them to me. There, in the cemetery record book, I found that Mary Sumner Furman was indeed buried in the George Sumner family plot.

My great grandmother Mary’s life, and especially her final days, must have been difficult. But she brought forth a daughter who was to be my Grandma Grace. I’ll have more to report on Grandma Grace in a future episode. (Actually, I posted on Feb 4, 2014 some recollections of a stay with her in Cleveland in 1946. For that episode, go here.

This posting on Mary Sumner Green is part of my participation in Amy Johnson Crow’s 52 Ancestors in 52 Weeks Challenge. For more details on her Challenge, go here.