My wife, MJ, and I share many things from our growing up years and among our continuing interests: we graduated from the same high school in the same year (Andover; 1956); we were HS senior class officers; we lived all early our lives in Ashtabula County, Ohio; we prefer classical music to popular music; we prefer Scandinavian decor; we like bourbon, and we like our beef cooked medium rare to rare. One thing we don’t exactly share is an abiding interest in genealogical research. In fact, MJ is only mildly interested in the results of my research.

One day a few years ago, she remarked: “If you keep going back, you’ll probably find that we are related.” I didn’t think much of her comment at the time. So you can imagine my amazement when I was looking at her family tree that I had assembled on Ancestry.com. Several people on her father’s side back in the late 1700s had names that seemed similar to names in my family tree, so I switched to my family tree, and there on my mother’s side were the exact same names.

When I reported this to MJ, it got her attention, and she, of course, said: “See. I told you so!” Now she likes to repeat this story whenever conversation drifts into genealogy and family history.

It turns out we both are descended from Hezekiah Sumner, who is my fifth great grandfather, and her sixth great grandfather. He was born in 1724  in Middletown, Middlesex County, Connecticut and lived later in life of Bethlehem (now Otis), Berkshire County, Massachusetts. He died in 1802.

Here is how we are related:

By the way, if you want to doublecheck this relationship, go to Cousin Calculator. The website provides an automated calculator for cousinship, as well as an article about how to use it. Also, Dick Eastman has an informative discussion of the subject of cousinship on his blog here.
So what else have I learned about Hezekiah in my research? He married Desire (a.k.a. Desiah) Higgins on 10 Feb 1744 in Middletown, Connecticut. They had their first child, Samuel, later that year. Then followed Tabitha (who died in infancy), Clemence, Tabitha (again), Abigail, Desire (who died as a child), Hezekiah Jr., Daniel, and Desire (again). As you can see from the descendencies laid out above, I descended from Hezekiah Jr, and MJ from Abigail. 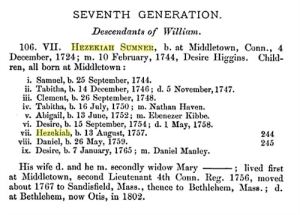 The above family group record appears in the book, Record of the Descendants of William Sumner of Dorchester, Massachusetts, 1636, by William Sumner Appleton. I found the book and the appropriate page in Google Books.

Whoa! The death date for Desire Sumner is after the death date for Hezekiah. Either her death date on her cemetery marker is wrong, the Findagrave transcription is wrong, or the family group record in the book Record of Descendants of William Sumner … is wrong. Another source (Massachusetts, Town and Vital Records, 1620-1988, Ancestry.com) gives her death date as 10 Aug 1794, so maybe the cemetery marker/transcription is wrong. Also, there’s the question of a second wife for Hezekiah by the name of Mary. Finally, it’s worth noting that there are two other Sumners buried in this tiny cemetery: Doreen Sumner, b. unknown, d. 1792; and Susanna Sumner, b 1797, d. Aug 7, 1800. Listings for them in Massachusetts, Town and Vital Records … state that they were daughters of another couple, Daniel and Hanna Sumner.

I have further learned that Hezekiah served briefly in the Revolutionary War in a militia from Stanisfield. He enlisted May 26, 1777 in Capt. Allin’s Company, in Col. Wiggleworth’s Regiment, and served 1 mon, 6 days. This comes from a 1926 application for membership in the Sons of the American Revolution, available online at Ancestry.com. The SAR application further mentions that his pay was refused because the date of his enlistment came after some sort of deadline. The SAR application provides the additional information that Desire Higgins was born in Truro, Barnstable County, Massachusetts in 1724 (another disagreement with the cemetery marker/transcription information).

I don’t have any information on Hezekiah’s occupation or station in life. So, while our joint descendency from him is firm, it’s obvious that there is room for more research on him and his family in Massachusetts and Connecticut.