I have just finished viewing Fire and Ice : The Winter War of Finland and Russia, a documentary video on YouTube. I was interested in viewing this because of my Finnish ancestry–my paternal grandparents emigrating from Finland in 1902 and 1903. My grandfather had many siblings and half-siblings who remained in Finland, so I probably have collateral relatives who participated in the conflict, but I have yet to track down any records of such relatives who were in the Winter War.

The nearly one-hour documentary (background info–http://media.wfyi.org/fireandice/index.htm) presents an overview of the conflict between Finland and the Soviet Union during the bitter cold of December 1939.  It incorporates interviews with veterans of both sides, as well as with Finnish civilians and various historical experts, plus re-enactment and actual movie footage, still photos, and maps to illustrate how the small Finnish army courageously defended the country’s borders against hundreds of thousands of Soviet troops equipped with tanks, artillery, and aircraft.

When Josef Stalin launched this war against Finland, he expected a quick victory, but the Finns waged what is now called guerrilla warfare with ski-mounted troops conducting ambushes and hit-and-run tactics against the larger and less-mobile Soviet forces. In some cases, the Finns even used reindeer to move supplies.

During the Winter War, the Finns invented the Molotov cocktail, which is defined in a Wikipedia entry at http://en.wikipedia.org/wiki/Molotov_cocktail. In particular, they used this home-made incendiarary device against Soviet tanks.The photo below shows a Finnish soldier with a Molotov cocktail. 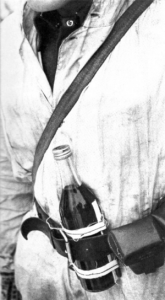 For much of the conflict, the Finns staved off the more numerous invading forces. But in the end, the Finns were forced to sign an armistice, ceding territory known as the Karelian Isthmus to the Soviet Union. As a result, some 400,000 Finns from the territory evacuated to Finland, where they were gradually resettled. 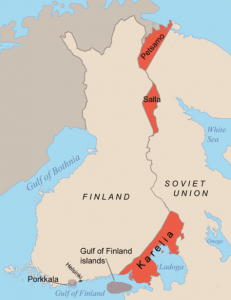 The Finn army suffered thousands of casualties, but the Soviets suffered far more with the highest estimates approaching 1 million troops lost as a result of what the Soviets called a “victory.”

For completeness, I should point out that the Soviets again attacked Finland in Jun 1941 in what is called the Continuation War that lasted until Sep 1944. Again, the Finns again staved off the Soviets.

There is a term in the Finnish language, sisu, which is summed up on Wikipedia (http://en.wikipedia.org/wiki/Sisu) as

generally meaning determination, bravery, and resilience. However, the word is widely considered to lack a proper translation into any other language. Sisu is about taking action against the odds and displaying courage and resoluteness in the face of adversity.

The Winter War (as well as the Continuation War) is the very embodiment of Sisu.