The Alien Registration Act of 1940 (aka the Smith Act) was enacted by the 76th U. S. Congress on 29 Jun 1940. It required all non-citizen adult residents to register with the government (It also set criminal penalties for advocating the overthrow of the U.S. government).

Registrations began on 27 Aug 1940, and the newly created Alien Registration Division of the Immigration and Naturalization Service planned to register between three and three and a half million people at 45,000 post offices by 26 Dec 1940, after which those not registered became subject to penalties of the Smith Act.

The Division advanced the view that registration benefited the alien, who “is now safeguarded from bigoted persecution.” The alien was to bring a completed form to a post office and be fingerprinted. Registration cards would be delivered by mail and would serve “in the nature of protection if the alien later runs afoul of the police.” The details required for registration were expanded since the passage of the Act to include race, employer’s name and address, relatives in the U.S., organization memberships, application for citizenship, and military service record for the U.S. or any other country.

The government encouraged registration by asking citizens to participate with this rationale:

“The Immigration and Naturalization Service asks for the cooperation of all citizens in carrying out the Alien Registration program in a friendly manner so that our large foreign population is not antagonized. Citizens may be of great help to their non-citizen neighbors or relatives by explaining to those who do not speak English well what the registration is, where aliens go to register, and what information they must give.”

The number registered passed 4.7 million by January 1941. In the following WWII years, even more aliens were registered.

What Are Alien Files?
The result of all this activity was a large collection of records called Alien Files, or “A-Files.” They are individual files identified by subject’s Alien Registration Number (“A-number”). An A-number is a unique personal identifier assigned to a non-citizen. A-Files became the official file for all immigration and naturalization records created or consolidated since April 1, 1944.

A-Files can be a rich source of biographical information. A-files contain relatively modern immigration documents collected together in one file. The United States collected increasing amounts of information from immigrants through the 20th century. A-Files from mid-century can hold a wealth of data, including visas, photographs, applications, affidavits, correspondence, and more.

Just as each immigrant received a singular A-number, each immigrant’s A-File is special. A-File content depends on the history of interaction between the immigrant and the agency. Some A-Files are only a few pages. Others contain scores or hundreds of pages in multiple folders.

The Immigration and Naturalization Service (INS) started issuing each non-citizen a unique A-number in 1940 as part of the Alien Registration Program (see Alien Registration Forms). On April 1, 1944, INS started using A-numbers to create individual files, called A-Files. INS opened or consolidated A-Files for every immigrant who arrived after April 1, 1944 or naturalized after April 1, 1956, and for immigration law enforcement matters.

Before A-Files, many aliens had more than one file with the agency. For example, an immigrant might have a Visa File, an AR-2, and a C-File. Accessing all agency records for an alien often required INS personnel to search multiple records systems and indexes. INS introduced A-Files to streamline its record keeping. Issuing each immigrant an A-number allowed INS to create one file for each immigrant containing all the agency’s records for the subject.

From April 1, 1944 to March 31, 1956, A-Files contained all INS records of any active case of an immigrant not yet naturalized. When the agency opened an A-File for a non-citizen with previous agency records, INS consolidated its other records for the subject into the new A-File. Upon naturalization, INS consolidated (refiled) all agency records of the new citizen in his or her Certificate File (“C-File”) and the A-File ceased to exist. Beginning April 1, 1956, INS started filing all agency records for active cases, including naturalization records, in the subject’s A-File. USCIS continues this practice today.

This all seems a bit complicated, and, to some extent, it is. However, the U. S. Citizenship and Immigration Service (USCIS) is the repository for A-files and its website has an orderly way to seek out the file material for an ancestor who might have been required to register during WWII. Be advised, however, that it does require payment of search and retrieval fees.

This diagram from the USCIS website (https://www.uscis.gov/historyandgenealogy ) shows the process for searching and retrieving a file (if any). 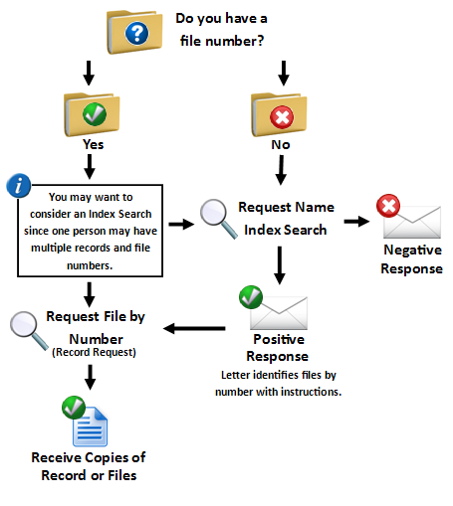 The receipt reproduced a the end of this post shows the information that I provided in my online search request.

After about 30 days, I received a letter confirming that indeed my grandmother did have an A-File and that for $35 I could request that it be retrieved and sent to me.

I filled out Form G-1041A, Genealogy Records Request online and paid my $35. Then more wating!

Finally, after about 100 days, I received the requested file for Ida Maria Huuskonen.

In this case, there wasn’t much I didn’t already know about Grandma in this file. I knew when she emigrated from Finland and where from, and I knew who her family members were in this country. But if somebody does not know all this information, then the alien registration form can be provide valuable additional information.

Was receiving the file worth the $55 I spent for searching and retrieving it? From an information standpoint, probably not. But I did derive satisfaction from seeking out and obtaining one additional record set for my paternal grandmother.

The Genealogy Program established by the U.S. Citizenship and Immigration Services agency is described in a brochure. To view it and download it, go here:
http://www.uscis.gov/sites/default/files/USCIS/History%20and%20Genealogy/Genealogy/genealogy_brochure.pdf 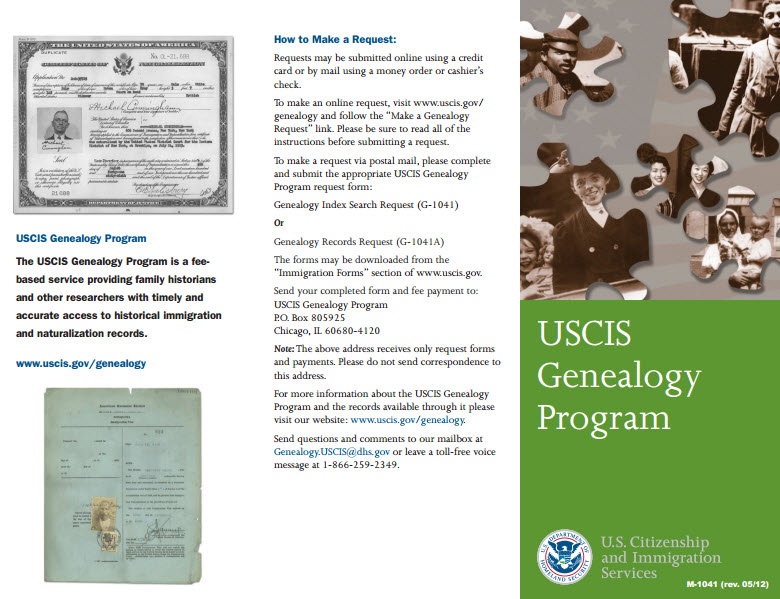 My Receipt for the original search request for Grandma’s file: