After three years of planning and hard work by Western Reserve Historical Society staff and exhibit professionals, the permanent core exhibit “Cleveland Starts Here” is now open to the public. The opening day for the exhibit, which occupies the Reinberger Gallery, was November 29. The main entrance from the History Center parking lot also is now open after being closed for the exhibit installation.

The new exhibit was developed from the beginning to help commemorate the Society’s 150-year anniversary in 2017. The exhibit serves as a vibrant introduction to the Society’s Cleveland History Center.

Using the latest technologies and techniques available to museum designers, visitors will discover how a small wilderness town on the shore of Lake Erie became an industrial giant, the home of immigrants and American presidents, a world-class center for arts, culture, and education, and a world-renowned innovator in medicine and healthcare.

Visitors who are coming to learn about their family history or do genealogical research will be able to get a quick overview of the history of Cleveland and the Western Reserve before continuing their visit in the Research Library.

As befits an opening of this caliber, the Society made sure that Northeastern Ohio was made aware of what was coming. On November 1, a Coffee with a Curator event that featured Eric Rivet, curator of collections and Exhibitions, and Margaret Roulett, Archives and Special Collections manger, provided background about what went into evaluating and selecting artifacts to display in the new exhibit.

Next came a luncheon hosted by the Museum Advisory Council, an auxiliary of WRHS, in the Community History Gallery, on November 10. Attendees were treated to a panel discussion about what went into designing the exhibit by Dennis and Kathleen Barrie of Barrie Projects and Kelly Falcone-Hall, CEO of WRHS. Barrie Projects was the lead designer of the exhibit. In the panel discussion, it was revealed that nearly 1,000 artifacts were brought out of storage and put on display.

On Sunday, November 26, the Cleveland Plain Dealer presented a full-page article about the exhibit that would be opening three days later.

That article included the following overview of what visitors would see:

The exhibit is divided into sections that trace the city’s history in big chunks, such as “1810s: The Land of Milk and Honey,” “1901-1909: Governed by the Best Mayor of the Best City in the USA,” and “1940s-50s: Best Location in the
Nation.” The story continues until today, with the inclusion of the Cavs victory parade and the 2016
Republican National Convention.

Each section includes numerous artifacts, maps, a video and interactive “peeks.” There are many treasures, like a surveyor’s field notebook from 1796, children’s clothing from the 1930s and an Abraham Lincoln “life mask” from 1860.

Lastly, WRHS members were invited to attend a gala reception and ribbon-cutting on the evening of November 28. More than 500 members and guests attended the event for a first look at the new exhibit. 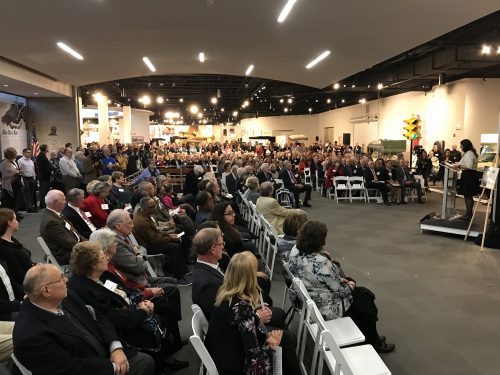 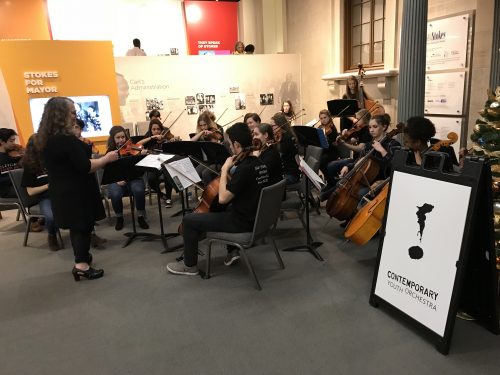 After the ribbon-cutting, visitors entered the exhibit area to see that Chief Wahoo was still in place on the north wall of the Reinberger, as was the 1939 mural developed for the World’s Fair by a local artist on the west wall. 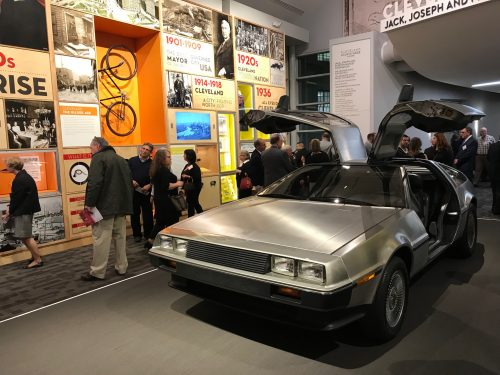 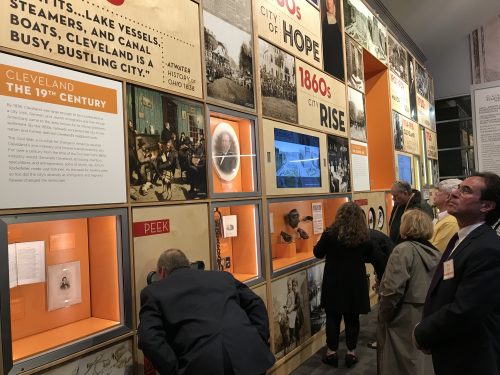 A display of giant images and historical objects occupies the former window wall of the Reinberger Gallery at Western Reserve Historical Society.

Visitors with an interest in genealogy were attracted to the interactive display of Moses Cleaveland’s genealogy and family history. Using a large touchscreen, visitors were able to answer questions about the family history of Cleavland and his descendants. For every correct answer selected, the guest was rewarded with a description of what documentation supported the correct answer. 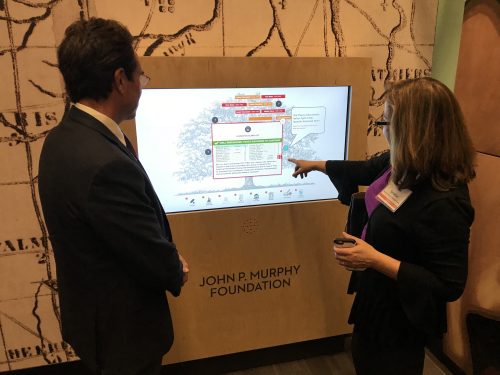 Some visitors visited the Research Library to see the computer workstations, reading room tables, and open stacks available for family history and other research.

The exhibit was made possible by a fund-raising program that garnered more than $2.5 million. Contributors are recognized on the Society’s website.