Earlier, I posted about my maternal Grandfather Wallace Betts Dingman and how he worked “for the railroad.” Click here for that post.

I have done some more research which I would like to report on now. First, here is a photograph of Grandpa Wallace taken in 1918 when he reportedly was working as a switchman for the Bessemer and Lake Erie RR: 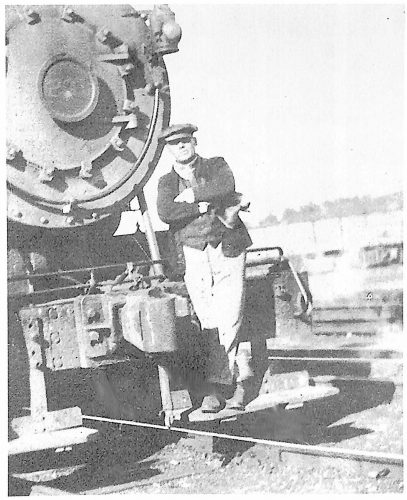 Wikipedia provides the following job description: “A switchman … is a rail transport worker whose original job was to operate various railway switches or points on a railroad. It also refers to a person who assists in moving cars in a railway yard or terminal.”

I also have a clipping of Grandpa’s obituary that ran on page 1 of the weekly newspaper Andover Citizen. Here is my transcription of that obit:

Funeral of Wallace Dingman
Funeral services of the late Wallace Dingman, who died at his home in Conneaut, Thursday morning of last week, were held Sunday, first at the home where there was a short service, and at 2 p.m. in the M. E. church at Williamsfield, where he had lived as a boy and young man. There was a large attendance at both places.

Mr. Dingman was popular with his railroad associates and a leader in their organization. He took great interest in the betterment of his fellowmen and had held important positions in different assemblies of railway men. His death at the early age of thirty-nine ends the needed usefulness of a man of much natural ability and sadly bereaves the family of the support and loving counsel of a husband, father and son.

Deceased was a son of Mr. and Mrs. Andrew S. Dingman, of Simons. He was married to Miss Grace Morley of this place and they moved to Conneaut where Mr. Dingman was employed by the Nickle Plate railroad. To the union were born a daughter Mary and son Wallace Jr, who with the wife, mother Mrs. Mary Dingman and a twin brother Walter, of Simons, survive. A brother Nelson died in Ashtabula hospital several years ago.

The funeral was conducted by Mrs. Scott, of the Christian Science faith, who was assisted at Williamsfield by the regular pastor, Rev. Stage. There was a great profusion of floral tributes of Easter lilies, narcissi, roses, and calla lilies from the railroad men, Mothers’ club, Mothers’ Hour, other organizations and individual offerings, testifying [to] the loving esteem in which the deceased was held. There were twelve autos attending the funeral procession from Conneaut to the services in Williamsfield. On every hand were expressions of the deepest sympathy for those who in their bereavement had suffered such a deep and untimely sorrow.

Wallace’s cause of death is something of a mystery. On his death certificate, the certifying doctor wrote:

I have no knowledge as to cause of Death. He was treated by a Christin Cientist [sic].

The obit above identifies the Christian Science practitioner as “Mrs. Scott.”

More input on the subject was offered to me a few years ago by my brother Walfrid:

This is what I remember Mother saying so that is all it is but one fact can be verified by our grandfather’s death certificate.  The death certificate does not indicate a cause of death because he was in the care of a Christian Science practitioner.  This is true and Mother talked about this.  He, our grandfather, had been ill for some time with no improvement in his condition.  Someone suggested that he talk with a practitioner which he did.  His condition did improve.  To what extent and for how long, I have no information.  All I do know is that he went to a sale or auction, perhaps in Williamsfield, where an acquaintance saw him for the first time in quite some time.  The acquaintance said something to the effect he hadn’t seen him (Wallace) in some time and thought that he was dead.  Shortly after that his condition worsened and he died.
When Mother and Grandma Grace went to California, they visited in CS churches and I believe Grandma Grace would occasionally go to a CS church in Cleveland.
You may also know that Wallace was first buried in Williamsfield at the insistance of Grandma Dingman.  Grandma Grace also wanted an autopsy but Grandma Dingman would not allow it.  Sometime later Grandma Grace had Wallace exhumed and moved to Andover.
Reported to Wallace Dingman Huskonen by Walfrid via email on 2014 03 14.

The Christian Science practitioner undoubtedly was Jennie P. Scott. She was enumerated in the 1920 Federal Census as being age 48, married to Robert Scott, living in Conneaut Ward 1, Ashtabula, Ohio, and working “on own account” as a Christian Science practitioner.
This all suggests some further research: 1. Do employee records exist for switchmen for the B&LE and Nickle Plate Railroads? 2. Did Wallace belong to the Switchmen’s Union of North America? 3. Are there records for the Church of Christ Scientist in Conneaut?