I just ran across a reference to double cousins and didn’t know what the reference meant. To find out, I went to Wikipedia, my go-to source of information when I have access to a computer or other digital device. I wasn’t sure what I would find or how detailed the explanation would be. But wow, Wikipedia came through with explanations of all types of cousin relationships on the page devoted to Cousin

Mary Margaret Catherine was the oldest daughter of Christian Heinselman Jr. Her brother Thomas Jacob Elwood was the seventh child of Christian with his wife Rachel Kemp.

According to the Wikipedia article, my wife’s father Clyde Van Court would be a double cousin of Mary Jane Borquin (born Heinselman). Clyde was the son of James and Mary while Mary Jane was the daughter of Thomas and Anna Belle (see test above and chart below). She became the wife of Elmer Edward Borquin. Here is a chart illustrating the double cousin relationship between Clyde Van Court and Mary Jane Borquin (born Heinselman). 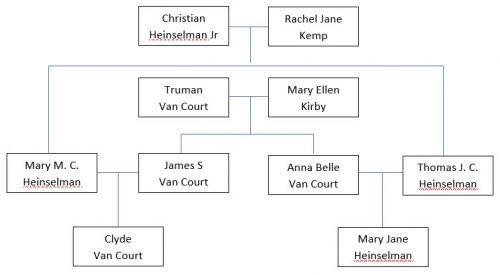 People are related with a type of cousin relationship if they share a common ancestor and the most recent common ancestor is two or more generations away from both people. This means neither person is an ancestor of the other, they do not share a parent (siblings), and neither is a sibling of a common ancestor (aunts/uncles and nieces/nephews).[3]

The removal of the cousin relationship is the number of generations the cousins are apart.

Many other cousin relationships are defined in this Wikipedia article, including first cousin once removed, half-cousin, stepcousin, and cousin-in-law.