Do you have ancestors or collateral relatives who died in Army or Army Air Force service for the United States during World War II?

If so, you might want to check out “World War II Honor List of Dead and Missing Army and Army Air Forces Personnel.” Go to http://www.archives.gov/research/military/ww2/army-casualties/index.html. As you will note in the URL, this is a page on the NARA website.

A similar list is available for Navy, Marine Corps, and Coast Guard Personnel at http://www.archives.gov/research/military/ww2/navy-casualties/index.html

Every state except Alaska and Hawaii is represented by a separate list, and those present-day states are included under the heading Territories of the United States (they became states in 1959).

Ohio Personnel are listed by county at http://www.archives.gov/research/military/ww2/army-casualties/ohio.html. Casualties for each Ohio county are listed alphabetically by surname. For Cuyahoga County, there are 14 separate pages and part of a 15th page. Click on the screen capture below to see an expanded view. 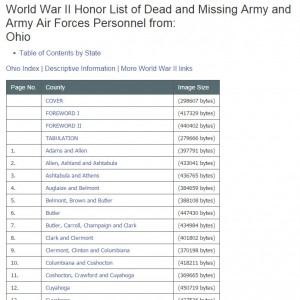 It is easy to find your way through the alphabet by clicking on Cuyahoga links one after another, then scan through the names on that page for the person you are looking for. The screen capture below shows a sample from the beginning of the Cuyahoga County Honor Roll. 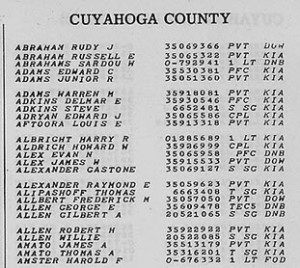 There some important qualifiers provided in the introductory material for the Ohio Honor List.

When you find the individual you are looking for, you will find the name (generally with middle initial and name suffixes, if applicable), service number, rank, and a casualty code. This is an important source of a person’s service number if you are doing further research and don’t already have it from other home sources.

Here is the discussion of casualty codes provided with the Ohio WWII Honor List:

TYPE OF CASUALTY: This is indicated by the symbol at the far right of each column. An individual who was killed in action, whether at the front or by enemy action in the rear areas, or if a prisoner of war, whether by air bombardment of his prison camp or by being shot while escaping, is designated “KIA.” Persons who were wounded and later died are marked “DOW”—died of wounds. Those who suffered fatal battle INJURIES as opposed to WOUNDS, in combat or in combat areas and died in a line-of-duty status, are designated “DOI”—died of injuries. Other line-of-duty deaths, such as from sickness, homicide, suicide, or accidents outside combat areas (including training and maneuver deaths) are listed “DNB”—died not in battle. Individuals who were determined to be dead under Public Law 490 are designated “FOD” —finding of death. Missing persons are marked with the single letter “M.”