I was working on my collateral relative Albert Bryan Wagner, Al for short, gathering any information available on Ancestry.com and from other online database providers. He was the husband of Faye F Dingman, my 1st cousin once removed. 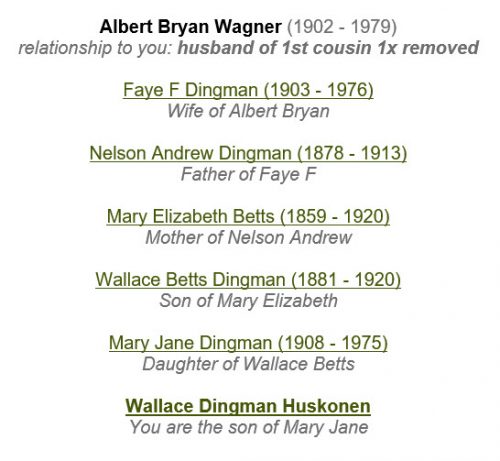 I never met the man, but he was discussed by family members because he ended up owning the Dingman farm in Williamsfield in the mid 1900s. He also owned the farm across the road where my father grew up. Al was a gentleman farmer, preferring to live in Youngstown where he operated an auto dealership. I’ll post more about him later.

While researching Al on Ancestry.com, I learned that he married again in 1977 after the death in 1976 of Faye Dingman, my cousin once removed. The bride was Gertrude Stoll, who also was marrying a second time.

Using Ancestry, I tried to track down details about Albert’s new wife. I thought that the name Gertrude Stoll would be unique enough that I would find her details quickly. I was wrong! There were Gertrude Stolls from many parts of the country,and I spent considerable time looking at them. There even was a Gertrude Stoll from Brooklyn Heights, Ohio, who married a man by the name of Wagner. But he was Theodore, not Albert.

After spending considerable time on Ancestry.com, I went to FamilySearch.org and searched for the Wagner-Stoll marriage record. Using the recently digitized Trumbull County, Ohio, marriage records, I found their marriage record and confirmed that both parties had been married before. This record also had the bride’s father and mother listed, so I learned her maiden name, which was Woods. 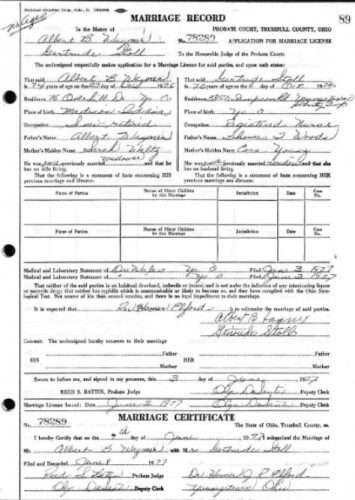 Once I had this additional information, I was able to learn about her parents and where she grew up. By poking around some more, I eventually found a family tree on Ancestry which informed me that her first husband was Martin Stoll, who passed away in 1970. There was no documentation of this relationship on this tree but I was able to find census and other records that proved Gertrude’s first marriage.

One of the frustrating aspects of this search was that I wasn’t able to find any obituary for either Albert or Gertrude using online obituary databases. Maybe I will have to make a trip to Youngstown to check for paper copies or microfilm in repositories there.

Anyway, this little research effort demonstrated to me once again that you have to be careful about adding the hints Ancestry.com suggests to you for your family tree.