This is another installment in my ongoing WWI research to commemorate America’s Centennial of entering the War in 1917.

“To Appear Saturday” read the headline on page 9 in the Hutchinson News for Tuesday, 16 Jul 1918. The Reno County, Kansas, newspaper was reporting that local men had been notified to appear for physical examinations:

On the list was Bert C. Butcher, 607 N. Main, Hutchinson.1 I was researching him because he was the son of my wife’s paternal grandmother, Mary Heinselman Butcher. I knew that he was in the Army and had died in 1918. I wanted to find out more.

Bert was enumerated as Albert C. Vancourt in 1900 in Grant’s Pass, Ritchie County, West Virginia, living in the household of James S. Vancourt.5 Using the Vancourt surname was probably a simplification of the situation as I have found no record of a formal adoption. Also, Bert used the Butcher surname or variations throughout his lifetime. Note also that the Vancourt surname was often spelled Van Court over the years.

The Vancourt household migrated to Richmond Center, Ashtabula County, Ohio, in the early years of the twentieth century. It was there that Bert met and married Illene Ida Carter on 10 May 1913.6 Almost a year later, on 4 Apr 1914, a daughter, Louise Ida Butcher, was born to the couple. Unfortunately, Illene died four days later.7 Louise died a year later on 20 Apr 1915.8

Bert moved to Hutchinson, Reno County, Kansas sometime in 1915 to live with cousins. He was enumerated as Albert Butcher in the Kansas State Census for 1915 (no enumeration date was given) as living in the household of E. E. Bourquin, husband of Mary Jane Heinselman, his mother’s niece.9 Bert’s occupation at the time was “casual laborer.”

Two years later, on 5 Jun 1917, he registered for the WWI draft in Hutchinson.10 He reported that he was married (this suggests that he remarried in Kansas) and that his wife was dependent on him. He also reported that he had been serving in the Kansas National Guard for a year. His occupation at this point was “auto painting.” Curiously, the draft card was made out for Bert C Butcser and that is the way he signed the card. Two hand-written notations apparently were added later by officials: his surname was crossed out and Butcher was added and the word “Deceased” was written diagonally across the card.

Bert no doubt reported for his physical on 20 Jul 1918 as required.  From his death record on an online website at ksgenweb.com listing Kansas WWI Casualties, we learn that Buteser [misspelling of surname variation Butcser], Bert C, Pvt, of Hutchinson was shipped off to Camp Pike in Little Rock, Pulaski County, Arkansas, on 15 Aug 1918.11 Camp Pike was one of many American Army training bases where thousands of troops fell ill with flu and many died. His death was reported as taking place in the Camp Pike Base Hospital on 27 Sep 1918. Cause of death was marked D for disease. More than half of the entries in this database died due to disease. There was no particular disease identified in this record set.

Authorities eventually identified flu as being responsible for the deaths of thousands of WWI soldiers in America and abroad. When the flu pandemic had run its course, it had killed as many as 50 million people worldwide.12

The Kansas website mentioned above provides the information that Bert served with the 41 Cas Co 162 Dep Brig. 61 Co 16 Receiving Bn 162 Dep Brig, which agrees with details on his headstone.

In another section of the same online database, titled “Relatives of Deceased Soldiers,” there is an entry for Mrs. Bert C. Buteser [sic], wife, 607 N. Main St., Hutchinson, Ks. 13 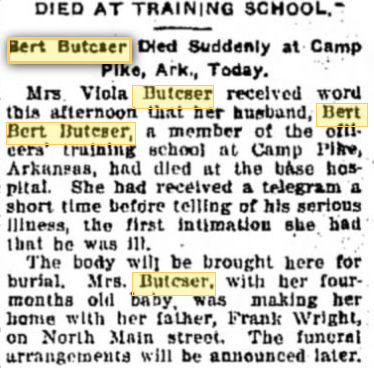 According to a newspaper report show above, Mrs. Viola Butcser was notified of his death14 and she arranged for his remains to be transported back to Hutchinson. He was buried in the Hutchinson East Cemetery. The cemetery stone below shows that he served in the 61st Co. 16 Reg. Btn 162 DB.15

From the newspaper report above, I learned that wife No. 2’s given name was Viola and that she was living with her father, Frank Wright. That suggested she was Viola Wright before marrying Bert. To date, I have found no marriage record for the couple.

The newspaper report gave me her given name and her probable maiden name, plus the fact that she had a baby daughter at the time of Bert’s death. With this information, I was able to track much of Viola Butcser/Butcher’s ongoing life in Hutchinson. as a widow. An interesting fact revealed in the 1930 Census was that she was employed as a nurse.16 Perhaps her husband’s death due to flu had something to do with her becoming a nurse.