One day last week I received a phone call from Carl Feather, a feature writer for the Ashtabula, Ohio, Star Beacon. He was calling at the suggestion of Penny Redmon, my wife’s first cousin once removed, to see if we had a photo of Buster, the beloved pet of my wife’s grandfather, James Van Court. He was writing a feature article about Buster, and his devotion to James, even after James’ death.
We didn’t have a photo in our family files, but I did a Google search for “Buster” and “Dog Mourns His Master.” Several search results showed up as appearing in the online database, NewspaperArchive.com. I have a subscription to this database so I signed in and searched for Buster.
Many results appeared in papers across the country on or around June 15, 1936. It seems that an article was distributed by a newspaper syndication service that told the story of Buster up to that point. Some of the search results included a photograph with the story.
Accompanying this article is the photo that appeared in the June 15, 1935, issue of the Circleville, Ohio, 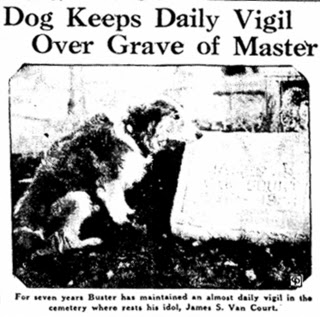 Tribune—on the first page no less. [A side note: the price for the issue was three cents.]