When I was seven years old, I visited Grandma Grace and her husband, Don Stafford, for a week at their residence at 1911 East 89th Street in Cleveland. It was really memorable to me because it was my first trip out of town, and, of course, I always enjoyed spending time with Grandma Grace and Don (her third husband).

The house at East 89th Street still remains today, and is apparently in good condition. I remember that Don rented out the second and third floors, but they still had plenty of room on the first floor. One thing that I remember about the house was that it had a wonderful front porch. When I began researching my family history, I drove by the house with the number 1911. Whoa! It didn’t have a front porch. Was I wrong in what I remembered?

As I learned more about historical resources that are available for family history research, I decided to see what I could learn from Sanborn Fire Insurance Maps, which show the general layout of houses and commercial buildings in urban areas. The maps were produced by the Sanborn Fire Insurance Map Co. for sale to insurance underwriters to consult when they were writing fire insurance policies for home and business owners.

For the State of Ohio, the Ohio Public Library Information Network, OPLIN for short, has purchased the collection of Sanborn maps microfilmed by the Library of Congress. The maps have been digitized from microfilm and put online for library-card-carrying residents of Ohio at http://www.oplin.org/sanborn.

I checked for a map of E89th Street showing No. 1911, and found one created for 1951. Bingo! It showed the front porch that I remembered from my stay at Grandma’s house. It is outlined with a dotted line in the house in the red circle. Apparently, the porch was removed later rather than undergoing major repairs. 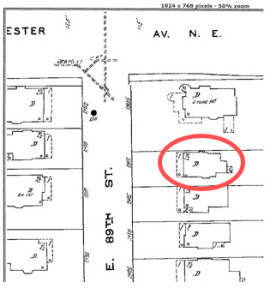 There was one other recollection from that long ago visit, and that was Grandma Grace’s interest in collecting buttons. Shortly after I caught the genealogy bug, an article appeared in the Cleveland Plain Dealer Magazine (10 Mar 1996, p. 4) about the Cleveland Button Society. I clipped that article and saved it.

Recently, for some unknown reason, I decided to do a Google search for the Cleveland Button Society. I got a hit at http://www.ohiobuttons.org/ClevelandClub.html, and it included a link for a contact. I immediately sent an email to her and she responded right away.

This is your lucky day! I cling to bits of button collecting history.

At both national and state levels, members receive membership directories annually and I happen to have a 1945 national directory which does list Mrs. Grace Stafford. You can probably assume that she also held membership in the Cleveland Button Society as well. It was organized in February 1943.

How wonderful of you to recall this button memory. Are you a button collector? Do you know what happened to her buttons?

Also, as an aside, East 89th, from Chester north, has been designated a historical landmark. Your grandmother lived in a choice neighborhood.

Of course, it helped! I sent Maxine’s message on to my siblings, Viena and Walfrid, and got an email back right away from Viena, who reported that she had one shadow box of Grandma’s buttons. Apparently, when Grandma died in 1948, Don sold off all but one of the button collection shadow boxes. Viena further reported that our mother was a bit miffed at Don for keeping only this particular shadow box, because apparently there were others that were a bit more fancy. In any case, my brother-in-law, Jim, photographed the shadow box that remains in our family’s hands and sent it along to me. I have included it in this post. 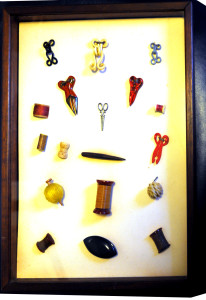 I also have included the membership directory scans that Maxine Richmond sent to me showing Grandma’s Grace’s name listed as a member of the National Button Society in 1945 (as Mrs. Grace Stafford). 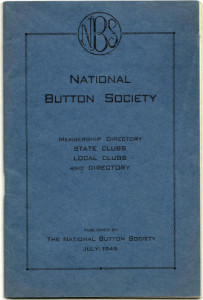 This exercise in family history research was rewarding to me because I was able to confirm two memories from that visit to Grandma’s house nearly 70 years ago.