This is another posting in my quest to record stories about 52 Ancestors in 52 Weeks, to meet the challenge issued by Amy Johnson Crow, back at the beginning of January, 2014. I am one of hundreds of people who have risen to the challenge of creating a weekly blog posting about an ancestor. For more information on  The 52 Ancestors Challenge, go here:< http://blogs.ancestry.com/ancestry/2014/01/10/the-52-ancestors-challenge/>

This episode isn’t about an actual ancestor. I don’t descend from William Henry Morley, but we have a relationship, nevertheless. His son, James Morley, and daughter-in-law, Jennie, “adopted” my grandmother at a very early age. I’ve not found any formal adoption records, but Grace considered herself to be the daughter of the Morleys, using Morley as her family name. She inherited their house in Andover in Ashtabula County, Ohio, when they passed away. We’ll have more to report about James, Jennie, and, of course, Grandma Grace in later reports.

William Henry Morley was born on July 28, 1804, in Massachusetts, when his father, Walter, and his mother, Charlotte, both were 39. William and Sybill were married in Spencer, Worchester County, Massachusetts. The couple had four sons and two daughters between 1827 and 1834. One daughter died in infancy.  After Sybill died in 1857, he married Mary J. Strickland  in Andover, Ohio. He died on March 5, 1877, at the age of 72, and was buried in Andover. Much of this information comes from various Family Trees on Ancestry.com, confirmed with census and other data.

In fact, I have tracked William Henry in several U.S. Federal Census records provided online by Ancestry.com  and www.familysearch.org. I found him first in the 1830 Census, enumerated in Southport, Tioga County, New York.

The 1830 Census does not name names of people living in a household other than the “head of household.” William H Morley was enumerated as the head of household, one of two males between the ages of 20 and 30 (he would have been 26), along with two males under the age of five years, one female between 20 and 30 years of age (which would be his wife), and two younger females, one under five years of age and the other between 15 and 20. The combination of males and females and their ages does not exactly account for the Morley family in 1830, but people outside the family may have been living with them.

It’s not clear from the census how “permanent” William considered his residence in Southport. He could have stopped there just for a few months to practice his craft as a blacksmith and save up some money. Many people from Massachusetts and other New England states moved from place to place through New York and Pennsylvania on their way westward to Ohio country and beyond.

By 1840, William H Morley lived in Andover, Ohio, where he and his family were to play a big role in the affairs of the area. Like the 1830 Census, the 1840 Census does not report names of household members living with William. There were eight people living in the household, six males and two females. A male and a female in the age brackets 30 to 39 would account for William and Sybill. The age breakdown for the persons under 19 accounts for one female child and five males 19 or younger. That probably included the four Morley sons plus one other. (Note: a second daughter apparently died as an infant.)

Historical accounts indicate that the Morley family arrived in Andover in 1834, without providing any specifics about the family’s migration. We can deduce a few details about their journey, however, by studying the facts reported in the 1850 U.S. Federal Census.

That’s because by 1850, census enumerators were instructed to record much more information about the people they were visiting. The 1850 Census for Andover shows that William H. Morley was 46 years old and lived in Andover, along with his wife, Sybil, and sons, Charles H, age 22; Edward W., age 18, and Byron, age 16, and daughter, Mary E, age 20. The enumerator reports that William and Sybil were born in Massachusetts, Charles and Edward were born in New York, Mary reportedly was born in Pennsylvania, and Byron was born in Ohio. This information gives us some reference points about the journey of the family to Andover, i.e. they were in New York State when Charles and Edward were born in 1828 and 1832 respectively. For Mary’s birth in 1830, they were in Pennsylvania, and by the time Byron was born in 1834, they had reached Ohio. As for occupations, William Henry and Edward H were listed as farmers.

The oldest son, James S Morley, was born on 03 Jul 1826 in Spencer, Worcester, Massachusetts, according to the database, “Massachusetts, Births and Christenings, 1639-1915” provided by the free online database provider, FamilySearch.org at https://familysearch.org/pal:/MM9.1.1/FCKP-MLS That indicates that William and Sybill were still in Massachusetts in 1826. Furthermore, another record on FamilySearch gives the marriage date and place for William and Sybel [spelling?] as 25 Feb 1825 in Leicester, Worcester, Massachusetts. Unfortunately, I haven’t been able to find other vital records for the Morley family.

Nevertheless, we can draw up a rough timeline for the Morley migration, based on the  birth record for James and the 1850 census data for his siblings, as follows:  1826 in Massachusetts, 1828 through sometime in the 1830s in New York, in Pennsylvania from 1830 (Mary’s birth year and place) to about 1833, with the final leg to Andover, Ohio, taking place by 1834.

In the 1860 U.S. Federal Census for Andover, William H Marley was 56 years old, living with his second wife, Mary (Sybill had died in 1857). By then, all the children had moved on with their lives, including the oldest son, James S Morley, age 37, who was enumerated in a household next door to his father. Living with James were his wife Maria, age 32; daughter, Maggie, age 4; Mary Knoxan, age 15 (probably working as a servant), and brother Byron, age 22. William and James were working as merchants, and Byron was a clerk, perhaps working for his father and brother.

In the 1870 Census, William H Morley was 65 years old and living with his second wife, Mary, age 48, and Eva Strictland, age 14, probably Mary’s daughter by her first marriage. No occupations were reported in the 1870 Census, but William’s real property was valued at $6400 and his personal property at $2400.

When I was a teenager, I worked at the Andover A & P (yes, it was the Andover store of the Atlantic and Pacific Tea Company). It occupied half of a building which I learned later was known as the Morley Block, with a 5&10 store occupying the other half. This probably was where the Morleys had their company, W.H. and J. S. Morley. At the time of my employment at A&P, I didn’t realize how close to family history I really was.

William Henry died on 5 Mar 1877, at age 72, and was buried in what was known formally as Andover Township Union Cemetery, which occupies a lot behind the Andover Congregational Church (now the United Church of Christ). The only image I have for William Henry Morley is his cemetery monument, which I found here on Find A Grave: 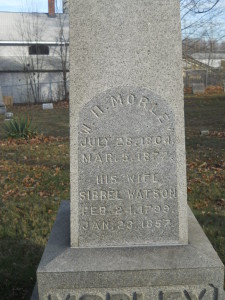 The fact that William H Morley brought his family from Massachusetts, passing through New York and Pennsylvania, and finally settling in Andover some 180 years ago, played a big role in determining where I would live until going to college. And the Morley family laid the groundwork for making Andover into a vibrant small town in which to grow up.

For that, I’m thankful to William Henry Morley!